Nikon sends the astrophotography-friendly D810A into a black hole 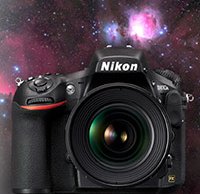 Pour one out for the Nikon D810A. Its time has come to an end. Per B&H, the Nikon D810A has been discontinued and is no longer available for order. If you recall, the D810A was Nikon's first - and still only - full-frame DSLR dedicated to astrophotography. What made the D810A special was that it had a specialized IR cut filter which allowed for better capture of H-alpha emission nebulae. In fact, compared to the D810, the D810A was four times more sensitive to the 656 nm wavelength. Further, the D810A had a long exposure mode which allowed 900-second (15-minute) exposures without the use of a remote. Nikon simultaneously updated their Capture NX-D software with a new Astro Noise Reduction filter as well, which aimed to fix pixel artifacts without eliminating faints stars in your frame. B&H shows the D810A as being discontinued

While the D810A is dead, I hope that it is not a one and done full-frame camera for Nikon and that they release a similar product in the future. While it was a specialized camera that was not perfectly-suited for regular types of photography, there is a fervent group of astrophotographers out there and being able to purchase astro-optimized cameras directly from the manufacturer is a boon. There are third-party companies which will modify your cameras for you, sure, but that isn't the same as buying directly from Nikon.