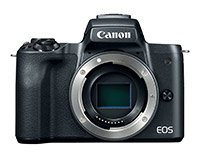 Canon's EOS M5 has widely been regarded as their most capable mirrorless camera. At least, that was until the Japanese giant announced the Canon EOS M50. This new EOS camera looks a lot like the M5, but it loses some dials, adds a vari-angle touchscreen and comes equipped with numerous internal improvements, including a new DIGIC 8 processor and the amply requested 4K UHD video recording capabilities.

The already excellent Dual Pixel CMOS AF has been upgraded as well, now capable of delivering 143 points and covering a larger image area with compatible lenses. You can learn more about compatible lenses in our Canon M50 Hands-on Preview as well, so head there to learn more about the camera's other improvements, including its new compressed RAW option and in-camera RAW development.

We will of course bring you our full lab treatment once a production sample is available, so stay tuned for much more to come. We'll also be analyzing and penning more on their new C-RAW format then as well.

The Canon EOS M50 will be released in April in a variety of kits, starting at US$779.99. Click the "Hands-on Preview" link below for more information.