When the conditions look promising, there’s no better day than today to capture your next great shot 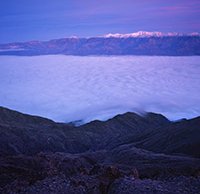 Large-format film photographer Ben Horne recently visited Death Valley and on his third day in the iconic location, he thought that the conditions were looking promising for sunrise. He packed up his gear and headed to a peak to try to get above dense fog. However, his gear is not as easy to set up in the dark as your digital camera might be.

At Dante's View in the dark, Horne hiked his way up to the peak carrying his heavy photo gear. Without being able to properly evaluate his surroundings or his focus, Horne still exposed a couple of sheets of Provia 100. Once the sun rose and hit the peak, he exposed Velvia film.

Later in the day, Horne headed into the valley to try a scene he had scouted the day prior. When he was there before, the light was not quite how he wanted when he finally found the composition he wanted, hence why he returned. This shows the value of scouting locations and visiting areas multiple times. To see how Ben Horne's third day in Death Valley went, watch his video below.