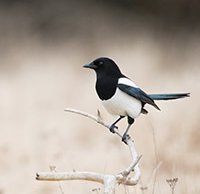 If you've ever tried to photograph birds, you know how challenge it can be. It's not only challenging for your camera to acquire focus on such small, fast-moving subjects, but it can be very difficult to even get close enough to your subject to have a chance at a nice image. A very long lens is basically a requirement, even if you have access to a blind like wildlife and nature photographer Morten Hilmer.

In the video below, we join Hilmer on an early-morning adventure to his blind where he will try to capture photographs of birds of prey in their natural habitat. He says that if the birds see you go into your blind, they're much less likely to get close, so he gets out there before the sun rises.

Hilmer is using his Nikon D5 with a Nikon 600mm f/4 lens. Join Hilmer in his behind-the-scenes bird blind video below.

Have you ever used a blind to photograph wildlife before? If so, let us know how it went in the comments below.