Fantastic flags: An uncommon and useful modifier used to change quantity and quality of light 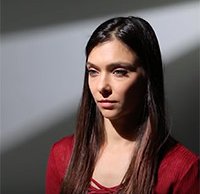 While there are a lot of common and purpose-built light modifiers, such as umbrellas, softboxes and reflectors, there are also a lot of other modifiers you can use that are less common, including a flag.

In his newest video, Jay P. Morgan with The Slanted Lens shows us how to shape light with flags as part of his Laws of Light video series.

There are multiple kinds of flags. There's a solid flag, which completely cuts out light. There's a net, which cuts one stop of light and a double, which, you guessed it, cuts two stops of light. There's a ragged edge on some flags, which allow you to feather the transition. Further, there's a silk, which is not designed to affect the quantity of light, but rather the quality. The silk will soften light, while also reducing it slightly, but not as much as the other types of flags.

To see how to use the different types of flags and what they can do for your portrait photography, watch Morgan's video below.