Trains, war & Kodachrome: How World War II gave a photographer one of his best assignments 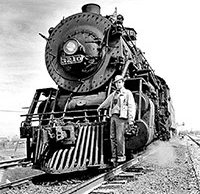 Arthur Bleich with Red River Paper has written a fascinating article detailing one of photographer Jack Delano's most interesting and important photo assignments. American photographer Jack Delano was born as Jacob Ovcharov in 1914 in the Russian Empire. At age 83, he died as Jack Delano in Puerto Rico and between those two bookends, Delano captured many incredible images and left behind a fascinating legacy of artwork, including as a composer.

Delano became interested in trains when he was only eight years old. Over 20 years later in 1942, he earned a dream photographic assignment, documenting the nation's railroads during wartime. As part of the Farm Security Administration, Delano was assigned numerous photographic tasks, including traveling the United States to document the lives of farmers and workers. When the United States became fully invested in World War II following the attack on Pearl Harbor, Delano was then assigned to document war efforts.

Delano was given incredibly broad access, including at one time having credentials from the FBI, the Association of American Railroads, the Headquarters of the Western Defense Command and the War Department Office of the Chief of Transportation. Delano was working at a particularly interesting time in photography. Many of his peers were shooting black and white but a new 4 x 5 inch color medium, Kodachrome, was made available to select photographers, including Delano. Many other photographers proved apprehensive, but Delano used the Kodachrome, despite it being challenging to work with its ISO 10-equivalent light sensitivity. Keep in mind that much of Delano's work was shot in very dark and dingy environments, making his choice all the more intriguing. To learn much more about Jack Delano and to see a variety of his work, head over to Red River Paper's excellent blog post.