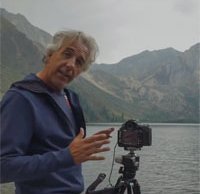 Photographer Attilio Ruffo is in California doing landscape photography and he wants to discuss camera settings. Ruffo likes to keep things simple and straightforward, so the video below focuses on four different camera setting topics: metering, exposure, focusing and shooting.

How does Attilio meter his landscape scenes? He primarily uses two kinds of metering modes, spot and matrix. The latter of which evaluates nearly all of the scene. How precisely it works depends on your camera, but in general, it meters the entire frame. Whereas spot metering uses only a small portion (often around 2-3 percent of the frame) to evaluate the proper exposure. Some cameras allow you to link the spot metering area with the active autofocus point whereas others lock the spot to the center of the frame. Ruffo estimates that he uses matrix metering in about 90 percent of his shots. Spot metering is reserved only for times when Ruffo wants to ensure that the exposure is correct for a very specific part of the image. For example, where Ruffo is shooting in his video, if he meters for the foreground, the correct exposure would be 1/125s at an aperture of f/8. The sky would be 1/1,000s. That's a big difference. What about matrix metering? Attilio's camera selected an exposure of 1/320s using matrix metering. In this case, the scene has a lot of dynamic range which means that a graduated neutral density filter will be needed for the best results, allowing Attilio to expose the darker foreground without blowing out the brighter sky.

Regarding exposure, you may be familiar with the exposure triangle. The three components which comprise an exposure are your lens' aperture, your camera's shutter speed and your camera's ISO setting. When shooting landscape images, Ruffo always uses his camera's aperture priority mode, which means that he selects the aperture and lets his camera select the appropriate shutter speed. His ISO is basically always at the lowest native setting, be it 64, 100, 200 or something else. There are times when you may want direct control over shutter speed, such as when shooting moving water, but generally, aperture is the most important element to control for landscape photography. To learn how Ruffo approaches focus and shooting in general, watch his video below.