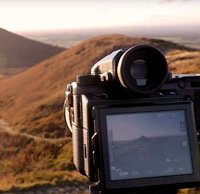 Photographer Adam Karnacz has recently been shooting with the Fujifilm GFX 50S and his latest video is focused on shooting landscapes with the medium-format mirrorless GFX. Does he think it’s the best landscape camera on the market today? Let’s find out.

To put the GFX 50S to the test, Karnacz headed to North Yorkshire in the United Kingdom on a crisp autumn morning. It’s worth noting that Karnacz didn’t buy the camera, but rather Fujifilm UK loaned him a camera and a couple of lenses to try for a few weeks. The camera and lenses are expensive, considerably more than some excellent full-frame camera kits, so Karnacz will be sticking with his Canon DSLR for now. With the aid of a graph, Karnacz showed how he perceives performance versus cost. If you have spent much time researching cameras across the cost spectrum, it likely won’t come as a surprise that there are diminishing performance returns as you spend considerably more money. Put another way, spending around $10,000 on a GFX 50S and a couple lenses will yield better landscape images than a kit which costs $2,500 or so, but the GFX won’t produce images four times better than the $2,500 setup.

Karnacz noted as well that he wanted to try the GFX 50S because, despite it being out of his price range, it uses the same sensor as the upcoming Fujifilm GFX 50R, a camera which will cost quite a bit less than the 50S. In the video below, you can join Karnacz as he works with the GFX 50S in the field and then processes files to make a final print.

To see more work from Adam Karnacz, be sure to follow him on Instagram and check out his YouTube channel. Stay tuned to Imaging Resource for more on the upcoming Fujifilm GFX 50R medium-format mirrorless camera.