Previous Story Sony Q&A @ CP+ 2019: The future of AI autofocus; what else is next. Plus, expect more APS-C bodies!
Next Story Olympus 12-200mm f/3.5-6.3 First Impressions: The all-in-one vacation zoom for MFT stretches its legs

Dragonflies in flight: Behind the scenes with Ghislain Simard and his custom Hasselblad H6D-100c setup 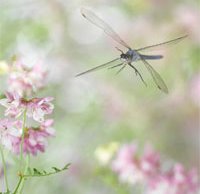 In the video below, Simard uses a camera not often considered for high-speed photography, the 100-megapixel medium-format Hasselblad H6D-100C. Dragonflies are quite timid and fast-moving, so it is difficult to get close to them. To help overcome this, Simard uses a 300mm f/4.5 Hasselblad HC lens. To achieve a sharp image, Simard has set up a laser-guided system to detect when the subject flies into the plane of focus and then triggers the camera. To avoid blur, Simard has upgraded flash units to fire a flash as short as 1/111,000 of a second. There is still the issue of shutter lag. While the leaf shutter system of Hasselblad lenses is fast, Simard needed even more speed so he worked with Hasselblad to trigger his flash directly from his sensor, which makes his "H6D far faster than any 35mm DSLR" he has previously used.

"There's a kind of 3D effect with the H6D-100C that I have never seen delivered by a 35mm DSLR," says Simard of his 100-megapixel medium-format Hasselblad camera. You can view and zoom in to some of Simard's brilliant dragonfly macro images by clicking here.