Previous Story Fuji X-T3 Review Conclusion: This souped-up hybrid camera is one of Fuji’s most versatile cameras yet
Next Story Shooting soccer with the Olympus E-M1X paired with the (gasp!) Panasonic 50-200mm f/2.8-4 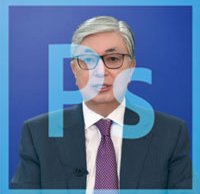 Photojournalist Amos Chapple of Radio Free Europe / Radio Liberty has discovered that photo manipulation is running rampant in the office of Kazakhstan's interim president, Qasym-Zhomart Toqaev (sometimes spelled as Kassym-Jomart Tokayev). The evidence suggests that someone is attempting to make the 65-year-old Toqaev appear thinner and younger. The president will be in an election in June, but much like previous Kazakh elections, his path to the presidency is essentially clear of serious challenge.

Beautification in photography is nothing new. From in-depth Photoshop retouching to simple skin-smoothing sliders, ways to make people look better in photos are everywhere. However, generally, instances of such photo manipulation show up more frequently on Facebook and Instagram than it does in official press photos.

By comparing images released by various press outlets and other political offices against those released by Toqaev's office, the evidence of photo manipulation by the interim president's team is impossible to ignore. For example, the office of Hungarian Prime Minister Viktor Orban released an image from an April visit to Kazakhstan by Orban. Shortly afterward, Toqaev's office released its own image. As Chapple points out, differences in color are likely due to the Hungarian office using a Canon 5D Mark IV and Toqaev's office using a Nikon D5. However, other differences in the images cannot be explained away by camera choice. On the left is a close-up crop from the Hungarian press photo. On the right is a crop from the image released by Toqaev's office. There's a noticeable difference in the look of Toqaev which is impossible to explain away with different cameras being used to capture the separate images.

Another instance of blatant photo manipulation comes from March, when U.S. Ambassador to Kazakhstan William H. Moser delivered his credentials to Toqaev. KazInform press agency released an image, seen first below. A slightly different image was released by Toqaev's office and shows a slimmer, younger-looking Toqaev. The shape of his face is dramatically altered as well. In March, U.S. Ambassador William H. Moser (left) handed his credentials over to Toqaev (right). This image is from Mukhtar Kholdorbekov, a Kazakh press photographer. The image was published by KazInform. Toqaev's office released this image from the meeting. You can notice a dramatic difference in Toqaev's skin texture and the shape of his face. No such difference is evident with Moser. A close-up crop of Toqaev's face from each image showcases the stark difference in the look of the Kazakh interim president. In case it's not obvious, the KazInform image is on the left and the image from Toqaev's office is on the right.

Some Western observers have not considered a single one of Kazakhstan's elections since the fall of the U.S.S.R. in 1991 to be fair, and the upcoming June election is expected to be no different. Even so, RFE/RL's Central Asia correspondent Bruce Pannier believes the manipulation is, unsurprisingly, politically fueled, "[Toqaev] will be 66 next month. You're replacing a [78-year-old man, Nazarbaev] with a 66-year-old man; it's not much of a change. So I think they're trying to give the idea that [Toqaev is] very youthful and dynamic and energetic despite the fact that everyone knows that he's going on 66." While this is likely not the first time photo manipulation has been used by a political office, and probably won't be the last, it nonetheless raises questions about the ethics of photo manipulation and the role imagery plays in informing public opinion.

Under the condition of anonymity, a professional retoucher commented to RFE/RL and stated his belief that a widely-used image distributed by Reuters had undergone retouching. Compared to older images of Toqaev, from before he took his current interim office, there is a dramatic difference. You can see this Reuter's image and more examples by heading to RFE/RL.

Tweet
Comment
Previous Story Fuji X-T3 Review Conclusion: This souped-up hybrid camera is one of Fuji’s most versatile cameras yet
Next Story Shooting soccer with the Olympus E-M1X paired with the (gasp!) Panasonic 50-200mm f/2.8-4