Photographing waterfalls in the Faroe Islands with Mads Peter Iversen 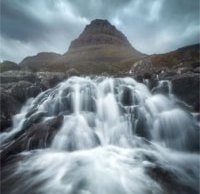 As part of his ongoing video series, Photographing the Faroe Islands, photographer Mads Peter Iversen has visited numerous waterfalls. In his latest video, waterfalls are his primary focus as he explores the area and discusses his personal approach to waterfall photography.

The first location Iversen visits features a small cascading stream coming down through the hills with a rugged rock formation in the background. At this spot, Iversen had to experiment with different camera heights to dial in the best-looking perspective with his wide-angle lens. It's often tempting to immediately shoot from eye-level, but sometimes the best angle is higher or lower, so be sure to experiment with different heights before capturing your final shot.

As Iversen continued to explore, heavy clouds moved in, which reduced ambient light quite a bit. It became dark enough that he was able to shoot using just his polarizing filter, which is used to reduce reflections on the water and make the water appear clearer and darker in images. With this filter in use, he was shooting at shutter speeds between 1/8s and 1s, a nice range when shooting fast water. When shooting in dark conditions, it's important to consider how the white of the churning water will appear in the overall scene. Bright areas of a composition will often draw and lead the viewer through your frame, so be sure to consider where the brightest water will be in your image. To follow along with Iversen at additional waterfall locations, watch the full video below.