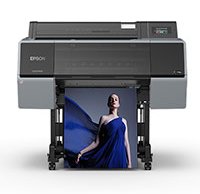 In the high-end printing industry, products are released much slower, meaning that each new product introduces major updates, rather than incremental upgrades. Epson's new SureColor P-Series wide-format printers, the P7570 and P9570, highlight this by introducing new ink and printer head technologies. When I had a call with Epson about a month ago to discuss these new printers, I was told that new high-end printers are only released when the company has made a breakthrough with print head or ink technology, although in the case of the new 7570 and 9570 models, it's both.

Before exploring the new printers, let's look back. It has been two decades since Epson released their first professional wide-format printer, the 44-inch Epson Stylus Pro 9000, and the industry has undergone considerable changes since then. At the turn of the 21st century, digital photography was still a fledgling industry and the resolution of cameras was paltry. Printing images at home, especially from a digital camera, was basically unheard of. Epson played a large role in changing this dynamic and allowing photographers the ability to easily print high-quality images at home. Back to 2019, the new P7570 and P9570 are 24- and 44-inch wide printers, respectively. They each feature all-new UltraChrome PRO12 pigment ink and 2.6-inch PrecisionCore MicroTFP printhead technology, which feature dedicated nozzles for matte and photo black inks. The dedicated nozzles mean that users no longer need to switch between photo and matte black inks when changing media types. The new head allows for improved image quality at up to 2.4 times faster print speeds. The SureColor 7570 and 9570 are Epson's most advanced printers to date, not only in terms of print quality, but also in terms of performance and the overall feature set.

To improve print quality when using glossy and metallic media, the new printers feature a Black Enhanced Overcoat print mode. This mode results in improved DMAX for a wider contrast ratio, improved black density, improved perceived clarity and sharpness and reduced gloss differential. This mode, which can be enabled in the printer driver, works by determining where on your print there is gray and black ink being applied and then applied additional light gray ink in highly-precise locations. This results in about a 10 percent increase in black density. It should be noted that enabling this mode will reduce print speed by about half, but will still be faster than the previous-generation models.

Looking at the printers themselves, they feature a new design and user interface. The printers include a new sealed roll media door for better dust control. A built-in LED light to view projects as they are printing, a new top-loading cut-sheet feeder door, internal rotary cutter, a customizable 4.3-inch touchscreen control panel, a redesigned retractable catch basket and more. When purchasing a professional printer, while workflow advancements are critical – and the new Epson SureColor 7570 and 9570 printers certainly feature those – it's also important that the prints you are making are long-lasting. In that respect, Epson claims industry-leading print permanence of 200 years for color printers and 400 years for black and white prints. Per Henry Wilhelm, the director of research at Wilhelm Imaging Research, the new UltraChrome PRO12 pigment inks are performing very well during initial testing, creating museum-quality prints with permanence results exceeding the last-generation UltraChrome HDX inks. Of course, longevity can be further improved by utilizing UV-absorbing display technology and using LED illumination.

To summarize the new Epson SureColor P7570 and P9570 printers, they offer the following noteworthy features and improvements:

The Epson SureColor 7570 and SureColor 9570 printers will be available this Decemebnr through authorized Epson Professional Imaging resellers for an estimated price of $4,695 USD and $6,595 USD respectively. The printers can be viewed at PRINT19 in Chicago, Illinois from October 3 through 5 at Epson's booth, #1227. Additional information about the new printers can be viewed here.