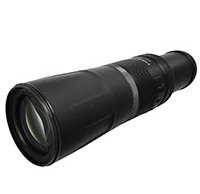 Alongside the Canon EOS R5 and EOS R6 cameras, Canon has announced four new lenses and a pair of teleconverters for its mirrorless RF system. The new lenses are an interesting mix! Canon has announced the RF 85mm f/2 Macro IS, RF 100-500mm f/4.5-7.1 L IS USM telephoto zoom, alongside the RF 600mm f/11 IS STM and RF 800mm f/11 IS STM. Let's take a closer look at each of these new lenses, including the very interesting f/11 super telephoto prime lenses.

Canon's latest mid-telephoto prime lens has been designed for macro photography, although Canon also believes it will be good for portraits due to its fast aperture and good bokeh performance. The RF 85mm f/2 Macro IS lens has a minimum focusing distance of 1.14 feet (0.35 meters), which results in a maximum magnification of 0.5x.

The 85mm f/2 lens has a dozen elements across 11 groups, including one UD lens. The rounded aperture diaphragm includes nine aperture blades. Equipped with optical image stabilization, the lens promises shake correction of up to 5 stops. The lens is also Hybrid IS compatible, allowing for correction for angular shift and camera shake when capturing macro images.

The Canon RF 85mm f/2 Macro IS lens is expected to be available in October with a suggested retail price of $599 USD.

Autofocus is driven by a pair of nano USM motors which offer floating focus control. The lens incorporates small focusing groups and uses the two motors to deliver swift autofocus speeds, which we are excited to use in the field as soon as possible. Image stabilization promises up to 5 stops of shake reduction. The two most distinct new members of the Canon RF lens family are the RF 600mm f/11 IS STM and RF 800mm f/11 IS STM telephoto lenses. These fixed-focal length, and fixed-aperture, lenses are designed to offer super telephoto focal lengths in very compact form factors. You read that correctly, neither lens allows you to change the aperture as neither lens includes moveable aperture blades at all!

Looking first at the RF 600mm lens, it has a minimum focusing distance of 14.76' (4.5m), which results in a maximum magnification of 0.14x. The lens incorporates 10 elements in 7 groups, including a special gapless double-layer diffractive optic lens. The IS-enabled lens promises up to 5 stops of correction when using a Canon EOS R camera. Speaking of specific cameras, the maximum aperture of f/11 has some implications for how this lens – and the RF 800mm lens yet to be discussed – will perform. The autofocus area on both the new EOS R5 and EOS R6 cameras is reduced when using the new f/11 prime lenses due to the f/11 aperture. The resulting autofocus area covers a 60 x 40 grid, which is similar in overall autofocus area coverage to the autofocus system in the Canon EOS 6D Mark II DSLR. This is to say that it is a dramatic reduction in overall focusing area when compared to a more traditional lens on the EOS R5 and R6 cameras. Interestingly, both lenses maintain autofocus capabilities even when using the new RF 1.4x and RF 2x teleconverters, which we will discuss shortly. Optically, the 800mm lens has 11 elements in 8 groups, including a gapless double-layer diffractive optic. It too includes image stabilization, which is rated at four stops rather than the five stops with the RF 600mm f/11 lens. Available by the end of this month, the RF 1.4x and RF 2x teleconverters will cost $499 and $599 USD respectively.