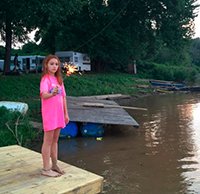 TIME Magazine has selected Stacy Kranitz as the Instagram Photographer of the Year for 2015 “for her use of the app ‘as it was intended.’”

The first award for Instagram Photographer of the Year was given to photojournalist David Guttenfelder in 2013, who used the app to document life in North Korea. In 2014, documentary photographer Matt Black was awarded the honor, making use of the service's geo-tagging feature.

This year, Stacy Kranitz’ “unique approach to the platform” earned her the award. Last year’s winner, Matt Black, says of Stacy that she uses Instagram as it was meant to be used, “to witness things as they happen.”

Although she now lives in California when she isn’t traveling, Kranitz uses Instagram to share photos she captured while exploring the Appalachian region of her native Kentucky. The resulting photographs are deeply personal and offer a direct look into the region and its people.

A photo posted by Stacy Kranitz (@stacykranitz) on

Kranitz became interested in photography after originally wanting to be a film director; photography's solitary nature suited her better. Her first foray into street photography, which was fast and aggressive, was brought to a halt due to a case of plantar warts that made it too painful for her to walk. She was forced to slow down and interact more closely with people, which "has been at the core" of her work since.

While working on a project, From the Study of Post-Pubescent Manhood, in Appalachia, she realized that the rural poverty in the area is historically significant and began to read more about the region and investigate the culture surrounding poverty. Having the chance to witness poverty, she began to ask more questions about her own work and delve into philosophical questions about poverty, subjectivity versus objectivity, and visual representation.

Tonight I'm at a Tent Revival on highway 23. Twelve different churches have come together to celebrate the lord Jesus Christ, their savior.

A photo posted by Stacy Kranitz (@stacykranitz) on

Rather than remove herself from the subjects she photographs, Kranitz opts instead to accept and embrace her presence and the impact that she has on her subjects. She can regularly be seen in her own work and hopes to blur the lines that often separate a photographer from their subject. To achieve this, she has drank and taken drugs with subjects and has also previously been in a romantic relationship with one.

Her willingness to become close with her subjects has led to some controversy, however, as documentary photographer Roger May believes that Kranitz's work "perpetuates the idea of a drug and alcohol-fueled Appalachia." In contrast, prior Time Instagram Photographer of the Year winners Guttenfelder and Black both find Kranitz's work "true, honest, raw, [and] beautiful."

For more information on the award and Stacy Kranitz, read the full article here.