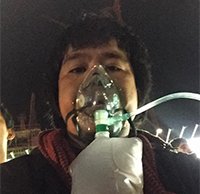 On New Year’s Eve, while many of us were celebrating the beginning of a new year, photojournalist Dennis Mallari was instead about to rappel down a skyscraper in Dubai as flames were consuming the building.

Mallari had been planning on photographing a fireworks display from a 48th floor balcony of The Address Downtown Hotel, but these plans were derailed when the 63-story hotel became engulfed in flames. After having been trapped for nearly two hours inside the burning skyscraper, he decided it was time to exercise his last resort option and rappel down the side of the building.

Somehow, the photographer for Al Bayan Newspaper was able to stay calm enough to ensure that his situation would be documented. The window-washing cable that he intended to use to make his frightening descent was ultimately too short to reach the ground, so his journey down the building could have ended in disaster. Fortunately, as he began to rappel down the building, GoPro in hand, firefighters found and rescued Mallari. Check out his frightening video below.

After being led to ground level through smoky stairwells with an oxygen tank by firefighters, he was treated for smoke inhalation. Shortly thereafter from a safe location, he took photos of the fireworks show that had led him up the skyscraper and to his brush with death.

In the end, the building fire resulted in fourteen minor injuries, one moderate injury, and one heart attack. The hotel's guests and staff had all been evacuated, although Mallari having been on a balcony was unfortunate enough to go undetected during the evacuation and quickly became trapped by smoke.

(Seen via PetaPixel with additional information from CNN)