Explore the highest-resolution photo ever taken of Dubai 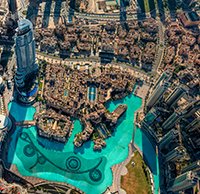 In celebration of the one year anniversary of Dubai360, a virtual tour of Dubai, the massive image has been updated by the photographer, Gerald Donovan. You can now explore a 45 gigapixel image with improved resolution and visibility.

To illustrate just how much detail is contained within this massive gigapixel image, check out the zoomed out and zoomed in photos below. Even at full screen, it is difficult to see the objects that you can actually zoom in to see in great detail. Screenshot of the updated gigapixel image before zooming in. The same scene zoomed all the way in near the center. The amount of detail contained in this massive image is crazy! If you can see it, you can zoom in on it. Notice the distant skyline... Here is that same distant skyline when you zoom all the way in. Besides having a higher resolution, the updated gigapixel image also has better lighting and visibility.

Gerald Donovan also captured an impressive aerial gigapixel image, which you can see here, and a 360-degree image with a Ricoh Theta S that you can view here.