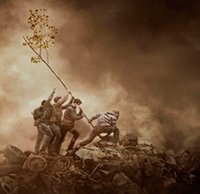 In an "Fstoppers original," Quentin Decaillet provides a behind-the-scenes look at Anthony Kurtz's Raising Redemption image. This reimagining of Joe Rosenthal's Raising the Flag on Iwo Jima aims to give the classic image an environmental twist.

Rather than the raising of a flag, Kurtz wanted to raise a tree. As it turns out, finding the perfect tree was not an easy task. Instead of buying an expensive tree or cutting one down (which would go against the very message he is trying to convey about environmental responsibility), he decided to instead build a tree from the pieces of felled trees. It isn't easy to transport a big "tree," so Kurtz engineered his tree to be broken down into two pieces and reassembled on location.

Now he needed his "Iwo Jima," his hill to plant the flag (tree). He actually started building his own hill, but a six-to-eight foot hill is not an easy thing to build. Fortunately, while he had completed only 30% of the hill, he actually found a construction site only three minutes from his studio.

A photo posted by Anthony Kurtz / photographer (@kurtzphotos) on

With his tree and his hill, Anthony needed models. He opted to use his friends. Before shooting the models planting the tree into the hill, Kurtz had to adjust the hill at the construction site and capture clean shots. He also had to paint the tree so that you couldn't see the seam. The shoot didn't go as planned, though. The light wasn't great, the models were distracted, and the ever-present threat of a police disturbance led him to stop the shoot ahead of schedule and just use the first image that he captured.

After finishing five different versions of the image, Kurtz didn't like the final result. It was too dark and didn't convey the message of hope that he wanted to show with Raising Redemption. He essentially started from scratch on the first version of the image that and put an additional twenty hours of refinement into it. Check out the final version below.

Guys, I'm so excited to finally publish my latest creation. "Raising Redemption" This is my second Masterpiece Reinterpretation. This time I chose "Raising the Flag on Iwo Jima" by Joe Rosenthal. Many thanks to the models: @graysonlauffenburger ,Melissa Engone, Ludwig Zimmer & Stefan Lauffenheyster and all the others who helped me. #cop21 #‎earthtoparis #climatemarch #climatechange #‎PeoplesClimate #apocalypse #postapocalyptic #redemption #mothernature #trees #nature #bts #iwojimamemorial #iwojima

A photo posted by Anthony Kurtz / photographer (@kurtzphotos) on

For more information on the shoot and many more behind-the-scenes images, check out the full article at Fstoppers. To see more of Kurtz's work, including a photographic recreation of the painting Liberty Leading the People by Eugène Delacroix, visit Anthony's website and follow him on Instagram.