Previous Story How It’s Made: Watch a Manfrotto tripod being assembled
Next Story Sigma lights the way with new EF-630 flash 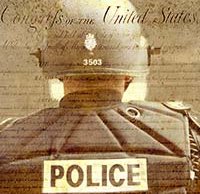 While many instances of photographing in public are protected by First Amendment rights in the United States, a federal judge ruled last week that photographing or recording video of police officers is not always protected.

Federal District Court Judge Mark Kearney ruled in the cases Fields v. City of Philadelphia and Geraci v. City of Philadelphia that photographers will be protected by the First Amendment only if the taking of the image is an action of opposition or protest (see below for the full ruling). Taking a photo of a police officer on the job without an accompanying "challenge or criticism" of the officer's actions is not protected by the First Amendment. If a photographer does not exhibit "expressive conduct" while taking the photos then they're not protected.

Also of The Washington Post, Radley Balko states this is the first time, as far as he knows, that a federal court has not ruled in favor of protecting a person's ability to record police officers on-duty in public. Kearney is the first federal judge to rule that there is not a right to simply photograph police officers.

If Fields and Geraci had been yelling at the police in protest while recording they would have been protected. But Balko wants to know, are the actions of pressing a shutter or a record button not in themselves an act of expression? The way in which you compose an image or frame a video are artistic decisions, which are protected as artistic expression by the First Amendment.

Ultimately, Judge Mark Kearney's issue seems to stem from the fact that the plaintiffs did not expressly tell police that they were capturing media for the purpose of protesting or otherwise disagreeing with the actions of the police officers being recorded. In the case of Fields, he took an image of a large group of police outside of a house party because he thought "it was pretty cool, it was like a mob of them…" In the case of Geraci (an individual who is legally trained to look for police misconduct), she was attending a protest but didn't share her purpose for being there while recording the police so she's not protected. Announcing your rights seems to have to precede your being protected in this case, which seems a bit absurd.

If you are required to announce to police that you're recording them and that you're doing it as a form of expressive conduct, what are the chances that any illegal conduct that you had been observing will continue when you start taking photos? Kearney's decision is very troubling and according to the ACLU an appeal is planned. Both plaintiffs are represented by the ACLU so this is likely far from over.

Tweet
Comment
Previous Story How It’s Made: Watch a Manfrotto tripod being assembled
Next Story Sigma lights the way with new EF-630 flash