Previous Story Meet SoloShot3, a new robot assistant that hopes to be your eyes and hands in the field
Next Story National Portrait Gallery acquires 140-year old album by Oscar Rejlander, the father of art photography 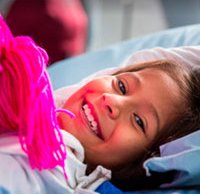 On April 16th, the South American nation of Ecuador was devastated by a 7.8-magnitude earthquake which claimed the lives of 660 people and injured over 4,500. In addition to the loss of human life, the country suffered immense physical damage as well with thousands of buildings being completely destroyed.

For the Rodriguez family, they thought that they had lost their young daughter Marielena, who was playing outside when a wall collapsed on top of her during the earthquake. Someone had rescued her before her parents had arrived and she was rushed to a local hospital. After hours of frantic searching for their daughter, unsure of her whereabouts or even if she was alive, they were able to find her at the hospital.

The local hospitals in Ecuador were unable to help treat all of the victims and Marielena and others were taken to an emergency field hospital set up by Samaritan's Purse. This organization was able to help many people including Marielena who needed surgery to repair her broken leg. "This 12-bed emergency room has the capacity to see more than 100 people each day." "Marielena on her way to surgery at our field hospital."

This piece highlights the emotional power of photographs. The well-composed images carry weight and have a real impact. Words are one thing, but thanks to photography, you're actually able to see images of the faces of those affected by a tragedy thousands of miles away. That has much more impact: You feel connected to the people seen in thestory.

In a world where bad things so often happen to innocent people, it is refreshing to see images showing people coming together to help those affected. Photojournalism tends to focus on showing tragedy or controversy, but photography can also show recovery and human compassion. The story at Samaritan's Purse has a wide array of powerful imagery and more stories from the field hospital, so please do yourself a favor and go check it out.

Tweet
Comment
Previous Story Meet SoloShot3, a new robot assistant that hopes to be your eyes and hands in the field
Next Story National Portrait Gallery acquires 140-year old album by Oscar Rejlander, the father of art photography