Previous Story Ricoh warns of possible production delays in wake of Kumamoto earthquakes
Next Story Caffeine Priority: Printing your own photos brings your work to life

Millions of views, but then what? Going viral isn’t all it’s cracked up to be, says wedding photographer 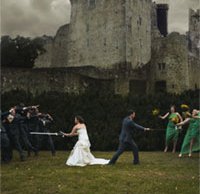 Going viral is a common goal for photographers and other content creators. Why wouldn't you want as many people as possible to see your work? Finnish wedding photographer Aaro Keipi had one of his photos go viral and thought it was a dream come true -- but it turned out not to be all it was cracked up to be.

It all started when Keipi posted the wedding photo shown below on popular image sharing website Imgur. Within a few hours it had over 100,000 views, and it wasn't much longer before it was picked up by numerous websites and Facebook pages, including the extremely popular British webmag UNILAD. The latter by itself was receiving hundreds of likes every minute for the photo, but the rapid spread of the viral image taught Keipi a valuable lesson about images online: You have almost no control over how they spread once they really take off.

A quick Google search revealed his image showing up on all sorts of websites around the world. "This was all exciting," Keipi says, "but one thing was missing from all of these shares: a photo credit." UNILAD did eventually add one once requested to do so, but like many sites which focus on viral content, they showed an all-too-common lack of respect for the image, failing to contact him before using it, modifying the image without his permission and failing to credit him from the start.

And does one of your photos going viral actually lead to making money? Not without a lot of work, says Keipi. Check out his post to see how he worked to leverage his photo and turn it into business. If you're curious about how he made the image, incidentally, he's helpfully put together a short video showing his process.

In the end, having one of your photos go viral isn't necessarily all it's cracked up to be. As photographers, we often want to share our work with as many people as possible, but it is much more important to make sure your photos are seen by the right people rather than by the most people. To see more of Aaro Keipi's work, visit his website and Facebook page.