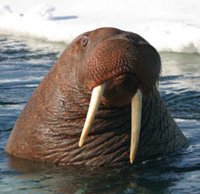 As if there wasn’t already enough evidence that animals, even ones in zoos, are unpredictable and still potentially as dangerous as their wild counterparts, a tourist visiting a Chinese zoo in Liaoning province was killed by a walrus.

The tourist, a businessman by the name of Jia Lijun, was attempting to take a selfie with the walrus. Per Chinese news outlet Sina, his WeChat showed him referring to the creature as being “so strong, so big.” Unfortunately for Jia, that description was accurate as shortly thereafter the walrus grabbed him by the back and dragged him into the pool.

A zookeeper then jumped in and attempted to save Jia, but tragically both men were drowned by the walrus. The zookeeper had cared for this walrus since it was a baby, so it seems unlikely that the animal meant any harm. Interacting with a one-ton creature comes with great risk, though, even if they appear docile. Hopefully the zoo will enact some additional safety measures around its walrus enclosure and prevent something like this from happening again.

Sadly, the number of fatalities involving selfies shows no signs of slowing. Today's news is the second such incident we've reported on this month. Just a few weeks back, an Indian teenager accidentally shot himself while posing for a selfie.