Not for the frugal fisheye photographer: Rare Nikon 6mm f/2.8 Ai-S lens available on eBay for around $85k 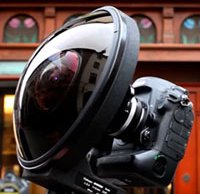 In 1972, Nikon introduced its Fisheye-Nikkor 6mm f/2.8 lens, and an updated Ai-S version followed in 1983. During its production run, these two optics were only available via special order and it is believed that less than 200 were manufactured in total.

Over the years, numerous copies of this rare lens have been available for sale with prices typically running the gamut from just under US$30,000 to nearly US$100,000, although one sold for an incredible US$160,000 in 2012. Reasons for the wide range of prices include the desirability of different variants of the optic, and also individual examples having different conditions and included accessories.

If you’re regretting not purchasing one of these rare lenses before now -- or just happen to have a large sum of money itching to be used to expand your glass collection -- then we have good news for you. There’s another of Nikon's Fisheye-Nikkor 6mm f/2.8 Ai-S lenses available for sale now on eBay. As of this morning, one bid has been placed for just under $85,000. The auction ends on Thursday at 10:30 p.m. EDT.

To get a sense of the insane 220-degree field of view that the lens offers, check out sample footage shot with it in the video below. For photos of this massive optic itself and to see a sample photo captured using it, see this Nikon Rumors article.

Photographers that scoff at a mere 180 degree fisheye field of view need look no further than this 6mm Nikon lens which is the widest 35mm fisheye optic ever produced. If you miss out on this opportunity, it’s hard to say when your next chance will come along, but history seems to suggest that one of these lenses will be put up for sale on a semi-annual basis.