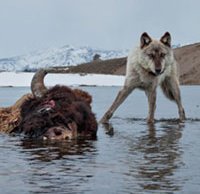 National Geographic has provided a behind-the-scenes look at photographer Ronan Donovan as he captured images of gray wolves in Yellowstone for the May issue of National Geographic, which focuses on the national park.

These stealthy creatures are suspicious and incredibly observant. Donovan says that "even the slightest reflection from a lens could scare off an approaching wolf." To combat their apprehensive tendencies, Donovan employed a variety of methods to try to hide himself and his gear including using camera traps.

Check out the video below to hear Ronan discuss his project and the associated challenges. Be sure to watch it in 1080p resolution to better view his excellent imagery.

The beautiful canines are an important part of the ecosystem in the Yellowstone region, but they weren't always adequately protected. After the park's creation in 1872, which did not itself provide specific safeguards for animals, the wolf population continued its decline in the area. As a result of numerous events, including government predator control programs in the early 20th century, they became nearly absent from the park.

Following the last official killings of wolves in the park in 1926, it was a very long road back to sustainable population. A reintroduction campaign started way back in the 1940s but didn't come to fruition until 14 Canadian specimens were released into Yellowstone in 1995. Today the gray wolf is no longer on the endangered species list and there are roughly 500 of them in the Greater Yellowstone Ecosystem. For more information on the history of wolves in the park, see here.

Yellowstone offers far more than a safe habitat for these predators, it is also a rugged and diverse landscape. National Geographic sent a team of photographers there for their May issue. You can hear their thoughts and see many excellent images in the video below.