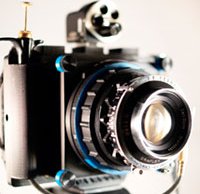 A universal camera? What does that mean, is it a real thing, and if so how is it possible? Answering the second question first, it's not real yet -- but it might be soon. That depends on the results of an ongoing Kickstarter campaign and the ability of Mercury Works' designer Zach Horton to turn the ambitious dream into a functional reality.

Now, on to what a universal camera is and how it's possible. According to its creator, the Mercury universal camera is designed to work with "nearly any lens ever made" and "numerous backs from numerous manufacturers" in addition to Mercury's own backs. Formats span 35mm to 4" x 5" and the camera even provides photographers a way to use their own lenses and settings with instant films from Fujifilm and Polaroid. This is all made possible through the use of a modular design and a variety of adapters.

The Mercury camera is aimed at a wide variety of photographers, including those who love manual controls, photographers who want a lightweight and inexpensive way to shoot medium and large format, and more. The Mercury Works team hopes to create a community of photographers free from proprietary systems and encourage an open camera system.

Currently the team has 3D-printed working prototype Mercury cameras, but the parts that need to be injection molded are more time consuming to manufacture. The first expected delivery of Mercury cameras is this December and backers will receive cameras in batches, first come first served.

Available in a large variety of configurations, getting your hands on a Mercury camera will require at least $120 and you will receive a Rezza medium format Mercury. At the richer end of the spectrum, $1,500 will get you a Dave 2: medium format digital Mercury which includes a Leaf Valeo 22 digital back with a medium-format digital sensor. This all looks very interesting, but the team is currently at just over $13,000 on the way toward their $50,000 goal with 26 days remaining in the Kickstarter campaign. If you're interested in supporting the cause or ordering a Mercury camera of your own, check out the campaign page here.