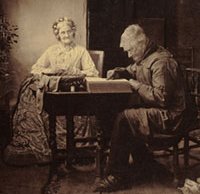 Yesterday we saw a really cool video shot in a Mexican underwater cave using a Sony A7S, but did you know that the first underwater photograph was created way back in 1856 by William Thompson? This is but one of the fun facts included in The Telegraph's list of ten "useless but exceedingly interesting facts about 19th century photography."

British high society had interesting connections to photography in the 1800s. Queen Victoria and Prince Albert were big fans of photography and even had a darkroom installed in Windsor Castle. The prominent pictorialist photographer Henry Peach Robinson created a copy of every one of his images for the royals.

Additionally, an elite photography club was created in London in 1892 for the purpose of furthering fine art photography. The Brotherhood of the Linked Ring was extremely difficult to gain entrance to, requiring new members to be unanimously approved by existing members. The first underwater photo by William Thompson, 1856. This image is in the public domain. These are the people you needed to impress to gain entrance to the Brotherhood of the Linked Ring. Photograph by Hans Studio, date unknown.

There is much more to learn! To see the rest of the ten facts about 19th century photography, see here.

(Seen via The Telegraph. Index image made in 1877 by Henry Peach Robinson.)