Infuriating insects: Rainforest ants aid in destruction of nearly $3,000 worth of camera equipment 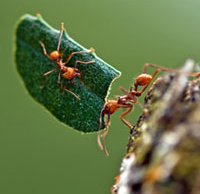 If someone tells you that they set up a camera trap in the rainforest to capture a photo of a jaguar, only to come back and find their gear destroyed, what would you guess was the culprit? The jaguar, perhaps, or maybe rain. Well, if you guessed the latter you'd at least be partially right.

After setting up a Canon 7D with an 18-55mm lens, off-camera flash and IR sensor, the rain-protected gear was thought to be good to go for overnight shooting. However, naturalist Phil Torres and photographer Jeff Cremer had inadvertently set the gear up near an ant's nest. The offending ants were a species of leafcutter ants, specifically.

These dastardly creatures are well-known for their destructive behaviors and certain species of the leafcutter ant can remove every leaf from a tree in less than a day. Foliage removal was not the issue for Torres and Cremer, but as you can see in the video below the ants did chew through the bags protecting the gear from rain, as well as the tripods and a variety of cables. And of course, per Murphy's Law it rained for half of the night.

By Phil's count, the ants (and rain) accounted for just under $2,800 in damages. Perhaps he could've used some Canon CarePAK Plus coverage to lessen the blow!