Previous Story Portable backup for your memory cards: Western Digital’s My Passport Wireless Pro WiFi hard drive
Next Story Are your images unforgettable? Run them through MIT’s “MemNet” algorithm to find out

The men who drive the megamillion-dollar boats: Portraits and sailing come together for Peter Hurley 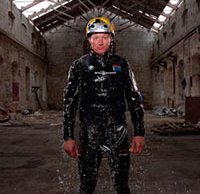 Established portrait and headshot photographer Peter Hurley picked up a camera for the first time when he failed to go to the Olympics for the United States sailing team in 2000. Sailing has been a part of his entire life, so it was exciting for Hurley when he got to combine his two passions, sailing and photography, and capture portraits of the Oracle Team USA as they trained for the 2017 America's Cup in Bermuda.

Coincidentally, Peter Hurley and other photographers were on a headshot cruise from New York to Bermuda. As a self-described "weekend warrior" sailor, Hurley is still ingrained in the sailing community and is good friends with a couple of the guys on Oracle Team USA. He phoned them and got to tour the team's facility. On the way out, he met with their media specialist and next thing you know he's taking portraits of the team. You can see him working in the video below.

The technology utilized in the America's Cup is staggering. Despite cost-cutting measures which aim to allow teams with budgets of only US$20 million or so to reasonably compete for the title, the amount of money funneled into sailing is immense. In 2013, Oracle's founder Larry Ellison spent over $115 million to defend the title. Rumors have it that title defense spending might be in the neighborhood of half a billion dollars for the team these days. (That is billion, with a "b.")

While the money spent on sailing is mind-blowing, capital itself doesn't have any skills. Sailors guide these high-tech yachts that can tear through the ocean at nearly 50 miles per hour. Oracle Team USA is committed to employing the best sailors that the world has to offer and you can see one of them, Jimmy Spithill below, as captured by Peter Hurley.

A photo posted by Peter Hurley (@peter_hurley) on