Previous Story No gold medal for this criminal: Photographer who was robbed of $40k in gear in Rio finds thief
Next Story Olympus, Nikon reveal big sales drops: Why the Kumamoto quake devastated the camera industry 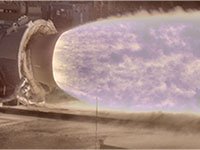 NASA is often on the cutting edge of technology, so it should come as no surprise that it's been working on an astounding piece of camera tech. The High Dynamic Range Stereo X (HiDyRS-X) camera recently recorded a rocket booster test of the Orbital ATK QM-2 and really strutted its stuff, showing off an incredible dynamic range. The camera was created in conjunction with Innovating Imaging and Research Corporation.

The HiDyRS-X works by simultaneously recording multiple exposures and its primary use is analyzing rocket engine tests. Unlike many high speed cameras, NASA's new camera can record multiple high speed video exposures simultaneously, which can then be combined into footage that exposes all of the areas of the frame, including the incredibly bright, hot rocket booster. In fact, the camera was developed solely because the rocket plumes are far too bright for traditional cameras to record. NASA hopes that its HDR camera will solve the problem, and the result of early testing is certainly promising.

Prototype cameras such as the HiDyRS-X can come with a few issues, however, and NASA encountered its fair share. The automatic timer mechanism failed. The power cord fell out and cut the recording short. Nonetheless, the footage it did capture is incredible. Of the anomalies, structural dynamist Howard Conyers was disappointed but said "Failure during testing of the camera is the opportunity to get smarter. Without failure, technology and innovation is not possible." If the footage below included some technical issues, I can't wait to see what it looks like when everything works as anticipated.

To read more about the camera and the project, see here. This revolutionary camera will continue to be tested and revised at Stennis Space Center. A second prototype is said to be coming soon, featuring improved manufacturing processes. Tweet
Comment
Previous Story No gold medal for this criminal: Photographer who was robbed of $40k in gear in Rio finds thief
Next Story Olympus, Nikon reveal big sales drops: Why the Kumamoto quake devastated the camera industry