Creating a Hollywood hit one frame at a time: Behind the scenes of stop motion animation 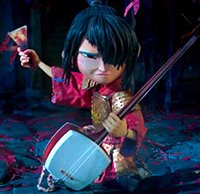 This story is a bit different, but it's way too cool not to share. I'm sure most of us are familiar with stop motion animation, the filmmaking technique wherein a scene -- often a very small one -- is recorded one frame at a time and then combined to make life-like video footage. For anyone who has ever tried stop motion animation before, perhaps with their camera's built-in stop-motion feature (such as can be found in the Panasonic FZ300) you know how time-consuming and difficult it is.

The team at Laika Entertainment are modern masters of this technique which dates back to the early 20th century, being responsible for such films as "Coraline," "Paranorman" and "Corpse Bride." Its latest film, "Kubo and the Two Strings" combines traditional stop motion animation with modern technologies like CGI and 3D printing to create a rich world that comes alive one frame at a time. The Verge recently went behind the scenes at Laika to show how the team combines art and technology to make their award-winning movies.

As you can see in the video below, the puppets are all real and posed by hand, but the armatures that support them and the seams on the puppets are all removed during post-production. Some aspects of a scene have to be created on computers, but the team insists on using practical effects and capturing as much as possible in camera. Check out the massive, highly-detailed sets and characters below.

If you want to take a look at how much work goes into creating every little detail for a movie like Kubo, check out the time-lapse video of the studio below.

And to see what everything looks like when it comes together, watch the trailer for "Kubo and the Two Strings" below. Kubo is in theatres now, so go check it out!