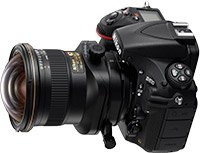 The widest lens in Nikon's perspective control line (which includes 24mm, 45mm and 85mm lenses), the Nikon PC 19mm f/4E ED lens is the first Nikkor PC lens to offer photographers the ability to make the direction of tilt either parallel or perpendicular to shift, allowing the most usability and perspective control of any Nikon optic to date.

With a 97-degree field-of-view on a full-frame sensor, the PC 19mm f/4 lens is well-suited for cityscapes, architecture, interiors and landscapes. You can tilt the lens to create images with vast depth of field or you can instead opt for a miniature effect. The lens can be shifted to adjust perspective, allowing for easier panoramic stitching or the elimination of converging lines. Of the new glass, Nikon's Director of Marketing and Planning, Kosuke Kawaura, says "the PC Nikkor 19mm f/4 ED will provide fantastic perspective control for a variety of challenging wide-angle applications." Taking a look at the lens' construction, the first thing you'll notice is the bulbous front element. The manual focus lens has a ridged focus ring, depth of field markers and a marked focus scale. Nearer the camera body are marked independent tilt and shift adjustments and knobs. Inside the lens is a total of 17 lens elements in 13 groups. There is a Nano Crystal and fluorine coating, three ED elements and two aspherical elements. Considering the bulbous front element, the Nano Crystal coating is of particular importance in helping to control internal reflections.

Technical specifications include a minimum focus distance of 0.9 feet (0.25 meters) from the focal plane, horizontal and vertical shift of up to 12 millimeters and 7.5 degrees of tilt in two directions. Rotation is available up to 90 degrees left and right with stops every 30 degrees. The tilt mechanism rotates 90 degrees left with a stop at 45 degrees. The lens weighs a total of 31.2 ounces (885 grams) and has dimensions of 3.5 x 4.8 inches (89 x 124 millimeters).

Photographers looking to get their hands on the wide perspective control lens need not wait long as it will be available starting in November for a suggested retail price just under US$3,400.

It may not seem like that long ago, but the venerable Nikon 70-200mm f/2.8G ED VR II AF-S lens was announced way back in July 2009, making the very popular lens due for a refresh. The latest version incorporates an electromagnetic diaphragm -- which leads to more consistent auto exposure when continuously shooting -- and numerous other new features.

On the physical side of things, in addition to the aforementioned 'E' designation, the Nikon 70-200mm f/2.8E optic includes Vibration Reduction (VR) capabilities which provides up to a reported four stops of image stabilization. This represents a half-stop improvement over the VR II lens. Weather-sealing has been improved as there are now a total of nine weather seals used in the lens' construction. The water- and dust-resistant lens also incorporates a fluorine coating on both the front and rear elements, which allows for easier cleaning of the lens' glass as well.

The most notable change to the appearance of the lens is the swapping of the zoom and focus ring. Nikon found that it would be more comfortable to manually focus the 70-200mm f/2.8E if the focus ring were closer to the camera body and the zoom ring was instead at the end of the barrel. There are also four function buttons on the lens barrel which can be programmed via compatible cameras -- Nikon D5, D500, D4S and D810/D810A -- to trigger settings including: preset focus point, AF-area mode, AF-area mode + AF-On (D5 and D500 only), AE/AF lock, AE lock only, AF lock only, AF-On (D5 and D500 only), Disable/enable, 14fps continuous (Mup) (D5 only), and sync. release selection. Optically, the 70-200mm f/2.8E FL ED VR lens includes 22 lens elements in 18 groups (versus 21 elements in 15 groups for its predecessor) and 6 ED glass elements (a one element decrease versus the G VR II lens). However, the new version includes a fluorite (FL) element and a high refractive index element, both new additions to its optical formula. Nikon states that the refined lens offers images with less chromatic aberration, distortion, ghosting and flare.

Look forward to our review of this new optic in the coming months. The Nikon 70-200mm f/2.8E FL ED VR lens will be available in November at a suggested retail price of around US$2,800.