Previous Story Panasonic FZ80 First Shots: How does the latest 60x superzoom hold up in the test lab?
Next Story How far we have come: Apple’s latest campaign showcases low-light capabilities of iPhone 7 camera 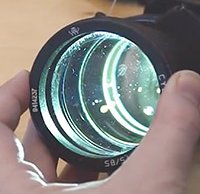 If you use old lenses in your photography, it’s possible that you’ve discovered fungus inside your lenses. Removing the fungus is not for the faint of heart, as it requires disassembling and reassembling your lens, but that doesn’t mean it’s an overly complicated process or one which will require you to send your lens away for expensive servicing by a specialist.

Depending on the construction of the lens and the fungus situation, the process can be very simple or somewhat more involved. In the case of a relatively simple lens, you can potentially get by with a lens spanner, dish soap and vinegar, as Mathieu Stern does in the video below.

This is a simple technique, but it does the trick. If the affected lens has a more complicated construction, however, you might need more tools. Photographer Tom Leonard wrote an excellent, detailed tutorial for PetaPixel. Rather than utilize dish soap and vinegar, he used hydrogen peroxide and ammonia.

Tom also posted in the comments section of the article some tips for keeping your lenses from developing fungus in the first place. None of his lenses have ever developed fungus, but rather he buys affected lenses for excellent prices, knowing that he can make them as good as new using his cleaning know-how. He recommends always keeping your lenses in dry storage, preferably with desiccant packages around them to absorb excess moisture. If you’ve been shooting in a humid environment, storing your lenses with the caps off can be a good idea. It’s also important to do your best to keep dust out of your lenses because this can act as a food source for fungus. Obviously some dust is inevitable, but properly storing your gear can help preserve its quality for a long time.

Readers, have you ever had to deal with fungus inside your lenses? If so, how did you get rid of it? Let us know in the comments below.

Tweet
Comment
Previous Story Panasonic FZ80 First Shots: How does the latest 60x superzoom hold up in the test lab?
Next Story How far we have come: Apple’s latest campaign showcases low-light capabilities of iPhone 7 camera