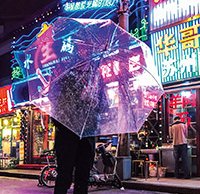 On November 5, 2016, Apple enlisted a group of photographers to head out and capture photos from sunset to sunrise to help showcase the low-light capabilities of the iPhone 7’s new camera. This marketing campaign, “One Night on iPhone 7,” is now on display in 25 countries as of January 30, 2017.

The photographers all had different ideas for how best to showcase the iPhone 7. For example, photographer Reuben Wu travelled to Indonesia to photograph active volcanoes with an iPhone 7 attached to a drone. Scottish photographer Ruairidh McGlynn went to Iceland and rode on a dogsled overnight to capture the dark Arctic environment. “Iceland is well known for its iconic landscapes. I wanted to produce a series of unexpected images that both pushed the boundaries of mobile photography and allowed people to reimagine Iceland – especially its possibilities at night. iPhone provides the ability to capture, process, curate and publish all on one device, all qualities that lend themselves well to the candid landscape shots and conditions I enjoy capturing,” said McGlynn. Part of what makes the iPhone 7 such a capable phone in low light is its optical image stabilization and maximum aperture of f/1.8. The lens allows up to 50 percent more light onto the camera’s sensor than the iPhone 6s. In conjunction with the image stabilization, users can shoot images with exposures up to three times longer. Check out the cool behind-the-scenes video below to see what the photographers did during their “One Night” with the iPhone 7.

You can see more images from the campaign here. It’s clear that mobile photography continues to improve by leaps and bounds thanks to Apple, Google, Samsung and many more manufacturers, who are continuing to one-up and challenge each other in interesting ways. In early October, Google’s Pixel smartphone earned DxOMark Mobile’s highest-ever score for a smartphone camera.

(Seen via The Loop. Index image by Jennifer Bin.)

Tweet
Comment
Previous Story Eradicating fungus in your lenses: Two DIY techniques for removing lens fungus
Next Story Hard and soft light made easy: Learning how to create and use hard and soft light