Previous Story Publishing to WordPress made simpler with new Imagely Lightroom plugin
Next Story Hasselblad announces new 120mm f/3.5 lens for the X1D, teases three more over the next 12 months 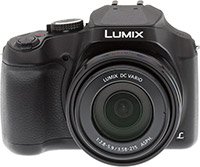 In 2013, Panasonic unveiled the FZ70 superzoom all-in-one camera, which made waves with its 20-1200mm equivalent zoom lens. Now in 2017, the FZ70 finally has its successor, the Panasonic FZ80, which pairs the same lens with a new image sensor, image processor and many new features, including 4K UHD video recording and Panasonic's 4K Photo modes. I had the chance to test the FZ80, which you can read about in our Panasonic FZ80 Field Test.

Rather than use the same 16.1-megapixel sensor found in the FZ70, the FZ80 ups the ante with an 18.1-megapixel sensor. The sensor is the same size as the one found in the FZ70 and many other superzoom cameras, a 1/2.3-inch type sensor, which contributes to only fair image quality at higher ISOs. However, the FZ80 proved capable of capturing good images and certainly holds its own versus other superzoom cameras.

Performance is an area of improvement with the FZ80. Like its predecessor, it can capture images at up to 10 frames per second, but the FZ70 struggled with a shallow buffer. However, thanks to a new processor, the FZ80 has a much larger buffer depth. In addition to generally good performance, the camera's autofocus system also proved to be quite capable in good light. While autofocus speeds slowed down at very long focal lengths, the camera nonetheless worked well in the field. Considering the FZ80 costs just under US$400, its inclusion of 4K UHD video recording (at up to 30 frames per second) and 4K Photo are particularly impressive. The camera can record sharp 4K video and it even allows for fully manual video recording. Add in the convenience of the touchscreen for moving focus around during video recording, and it is a very capable camera for the money.