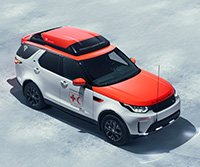 It’s not often that something relevant to Imaging Resource readers gets announced at the Geneva Motor Show, but for drone-obsessed readers, that’s just what happened when Land Rover announced a drone-equipped “Project Hero” Land Rover Discovery for use by the Austrian Red Cross.

The Project Hero is dubbed an “advanced communication vehicle” and it is designed to help decrease response times during disasters. Land Rover has a long relationship with the Red Cross, dating back to 1954, including deploying 120 vehicles to the International Federation of Red Cross and Red Crescent Societies (IRFC) over the years. The Project Hero is made special by its roof-mounted drone, a first for Land Rover.

This is not a case of tacking on a drone to a Land Rover Discovery, but rather the vehicle and drone itself have been engineered specifically to work well with one another. The fully integrated landing system includes self-centering and magnetic technologies, the latter of which is a brand-new technology and the first system that allows a drone to launch and land on a vehicle while it is in motion. Special Operations Managing Director at Jaguar Land Rover, John Edwards, says of Project Hero, “Land Rover and the team of engineers and designers at SVO are proud to support the incredible humanitarian work of the IFRC and its members. The new Discovery is an outstanding all-terrain SUV, and Project Hero is the optimum combination of enhanced capability and innovative technology. We hope to help the Red Cross save lives in emergency situations.”

Further statements on Project Hero include the following from Dr. Jemilah Mahmood, IRFC Under Secretary General for Partnerships, “We are grateful to Land Rover for their generous support over the past 60 years, and are proud of our ambitious global partnership that has transformed the lives of millions of people on four continents. The partnership is supporting communities around the world to become more resilient in the face of natural disasters such as monsoons, flooding and earthquakes. Project Hero combines the best expertise of the Red Cross and Jaguar Land Rover to create a truly unique vehicle, which we hope will be capable of making a difference to rescue operations in the toughest environments.” It is not difficult to imagine how useful it would be for a passenger to be able to launch a drone while the vehicle is moving. They could survey the road ahead or they could perform reconnaissance on areas the vehicle could not safely reach. In many disaster scenarios, time is of the essence and the difference between saving lives or coming up short can be mere minutes during response.

While the “Project Hero” Land Rover Discovery won’t be available for civilians, it is nonetheless an interesting technology and one which may very well point toward a future for the rest of us. As The Verge points out, Renault shared an interesting concept car a few years ago with a drone you could launch to check ahead for gridlock traffic conditions.