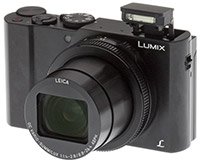 The Panasonic LX10 joined the premium compact camera market this past November, and we have just wrapped up our review of this new 1-inch-type sensor camera. The LX10 pairs a 20.1-megapixel 1"-type CMOS sensor with a built-in 24-72mm equivalent lens that has a very fast f/1.4 maximum aperture at 24mm.

During our Field Test of this premium compact camera, we found that the LX10 not only looked good on paper but also performed well in the field. Its image quality proved to be better than its Canon counterparts and very similar to the Sony RX100 V. The LX10 can capture images at nearly ten frames per second, although its RAW buffer depth is fairly shallow.

One of the LX10's best features is its 4K multimedia capabilities. The LX10 can record 4K UHD video and capture 4K photos at up to 30 frames per second. This helps set it apart from some of its competition and helps to make it a great value, considering the LX10 can be found for under US$650 at the time of writing.