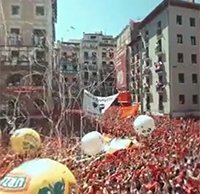 CNN’s global team will cover events in 360 video from their news outlets in New York, Atlanta, London, Hong Kong, San Francisco, Dubai, Johannesburg, Tokyo and Beijing. There will be VR live streams and weekly VR content. The first VR content is available now and gives you a 360-degree perspective of the running of the bulls in Pamplona, Spain.

This isn’t the first time that CNN has dabbled with virtual reality content, as they have produced over 50 stories in 360-degree video, including recently covering the latest U.S. presidential inauguration. To further virtual reality and CNNVR, CNN has created a new virtual reality platform, which works with CNN’s Android and iOS applications, desktop computers and VR headsets, including the Samsung GearVR, Oculus Rift and Google Daydream. CNNVR is the third level of CNN content distribution, following television and digital. You can view CNNVR content on mobile, desktop and through compatible VR headsets. Image credit: CNN

In an interview with Variety, CNNVR leader and CNN vice president Jason Farkas said, “We are adding a third layer, which is VR,” with the first two layers being TV and digital. Farkas added, “If you pick the right event, live 360 has a really bright future.”

While VR video quality still has a ways to go before it can catch up to modern traditional recording and streaming, it certainly offers an immersive, exciting way to view current events. It’ll be interesting to see how CNNVR does and how VR adoption progresses in the coming years.