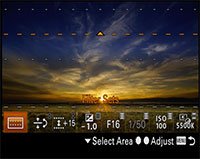 Sony has released a new camera application called “Digital Filter.” This PlayMemories application “allows you to divide the scene into two or three areas and optimize the exposure and white balance for each area, helping you to shoot the best image.” The applications are most obvious for landscape scenes where there is a large variation in brightness levels, such as at sunrise or sunset, allowing you to expose for the sky and for the foreground, creating a final image with a wider dynamic range. This replicates the effects of a physical graduated neutral density filter.

To learn more about how the Digital Filter application works, view the video from Sony below.