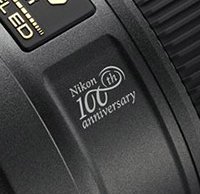 You may recall the beautiful gunmetal gray Nikon cameras and lenses the Japanese company showcased at CP+ in February to commemorate the company's 100th anniversary. At the time it was unclear if or when these items might be available to the general public. Nikon has announced that these items, detailed below, will be available in limited quantities on Nikon's actual 100th anniversary date, July 25. You can see our real-world shots from CP+ here, but let's take another look at the product offerings.

Nikon will be releasing special 100th Anniversary Editions of both the Nikon D5 and Nikon D500. The latest professional Nikon DSLRs will come in a dark metallic gray finish, but the two models have slightly different perks. The D5 will have an exclusive stamp on the bottom of the camera, which notes Nikon's storied contributions to the study and exploration of space. The camera will also come with an anniversary booklet which details the celebrated contributions.

While sharing the same finish as the D5, the D500 Anniversary Edition will come with an exclusive metal case which has an engraved plate with Nikon's commemorative logo and the camera's serial number. The case also comes with a commemorative body cap and leather strap set, both embossed with the 100th Anniversary logo.

What better way to capture great images with the limited edition commemorative cameras than with matching commemorative lenses, right? Nikon will also be releasing a special 100th Anniversary Edition of the Nikon Nikkor 70-200mm f/2.8E lens. The lens was released in 2016 and includes the latest in Nikon lens technology. You will even be able to get a unique look at the technology included in the telephoto zoom because the special edition optic comes with the individual glass elements that comprise the lens and a special stand and case for putting the elements on display. In addition to the 70-200mm f/2.8E special edition lens, Nikon is releasing dark metallic gray versions of their AF-S Nikkor 14-24mm f/2.8G ED and AF-S Nikkor 24-70mm f/2.8E ED VR lenses as well. Unlike the 70-200mm f/2.8E, this dark gray duo will only be available as part of Nikon's Nikkor Triple f/2.8 Zoom Lens Set 100th Anniversary Edition, which includes all three special edition lenses, covering the 14-200mm focal length range at f/2.8 in stylish dark gray. All of the lenses will include the same unique commemorative serial number.

If you want to cover the 14-200mm focal length range with fast f/2.8 glass, there is also going to be a Nikkor Triple f/2.8 Zoom Lens Set 100th Anniversary Edition.

Celebrate Nikon's 100th Anniversary with these other commemorative goods

In addition to the beautiful cameras and lenses, Nikon is also releasing three special edition binoculars: The WX 7x50 IF, WX 10x50 IF and 8x30 E II. These binoculars will be released in the same exclusive metallic gray finish and include commemorative logos, stamps and serial numbers. The binoculars also include special straps and the 8x30E includes a special case. There are also accessories for Nikon's biggest fans. You can purchase a Swarovski crystal version of the Nikon Model I, for example. If crystal isn't your thing, there is also a 1/2-scale model of a Nikon F camera which will be available. To add a Nikon flair to your lapel, how about a pin from Nikon's Anniversary Pin Collection? The collection includes pins showcasing the company's logo and product history. Or if you're looking for something more functional, you can opt for the Nikon 100th Anniversary Premium Camera Strap, which is made from Italian leather.

Unfortunately, we don't have any information on how much the products will cost when they release in July. However, you can expect more information in June and you can learn more now at Nikon's 100th Anniversary Site.