The pursuit of truth in portraiture: An interview with the photographer Platon 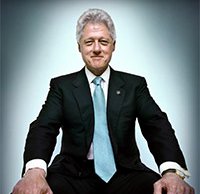 "A portrait to me is about closeness. It's about truth," Platon says in the opening of a new video interview (seen below) from PBS News Hour. The famous portrait photographer Platon has captured portraits of many famous and powerful figures over the course of his career. It can be challenging to capture genuine, honest portraits of famous figures with already-established images to live up to. "My job is not to be disrespectful, but to be authentic, to say, 'who are you really?'" Platon continues.

One of Platon's more famous portraits was of Bill Clinton, the first President he photographed. Platon thought it would be the only President he ever came into contact with, so he decided to be bold and ask Clinton to "show him the love." Clinton did just that, helping Platon create what ultimately became a controversial shot in the wake of Clinton's infamous sex scandal. "It wasn’t about [the scandal]. It was about charisma. He's a rock 'n' roll president."

Ultimately, Platon's job is to capture truth, a genuine representation of a subject. The subject sometimes resists, but through careful, considered dialogue, Platon often finds the shot he wanted to capture. It's incredible how many walls can be broken down with simple communication.