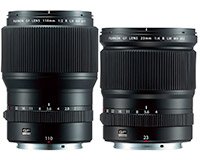 With the release of the Fuji GFX 50S in late February, the Japanese company officially entered the digital medium format mirrorless market. The high-resolution camera has impressed us so far, but the launch lineup of lenses was sparse with only three lenses being available to early adopters. Fujifilm had previously announced that three additional lenses would be coming in 2017 and two of them have now been given an official release date, specifications and pricing information.

While the GF 63mm f/2.8 launch lens plays the role of a traditional 50mm prime, portrait photographers were looking for something longer and faster. The GF 110mm f/2 R LM WR looks to fill that void with its 87mm equivalent focal length and bokeh-friendly maximum aperture of f/2.

The GF 110mm f/2 has a weather-resistant construction and is 3.71 inches (94.3 millimeters) in diameter and 4.94 inches (125.5 millimeters) long. The lens weighs 2.23 pounds (1,010 grams) and utilizes a 77mm filter thread. Looking at its optical construction, the GF 110mm has 14 elements in 9 groups, including 4 extra-low dispersion elements. Of these four ED elements, one is Super ED and they are all designed to suppress chromatic aberration and help offer high-resolution performance from edge-to-edge. Don’t forget that all GF lenses are being designed for camera sensors up to 100 megapixels despite the only available G-mount camera topping out at just over 50 megapixels. To help create beautiful out-of-focus areas, the lens has 9 aperture diaphragm blades which create a rounded opening. You can close-focus the lens to 0.9 meters, producing a maximum magnification ratio of 0.16x.

Portrait photographers left wanting with the GF 63mm f/2.8 lens will surely be excited by the new GF 110mm f/2. They will need to pay a pretty penny for this fast telephoto prime, however, as it will retail for around USD $2,800 (CAD $3,600) when it becomes available in late June.

Landscape photographers have flocked to the GF 32-64mm f/4 lens and it continues to be difficult to find in stores for good reason. However, its 25mm equivalent wide focal length doesn’t entirely scratch the ultra wide angle itch. That’s where the new GF 23mm f/4 comes in. This new lens offers an 18mm equivalent focal length, suitable for capturing a 99.9° field of view.

The GF 23mm is crafted for architectural and landscape photography, the latter group in particular demanding a weather-resistant lens, so like the rest of the GF lenses, the 23mm prime is dust and weather resistant. The lens weighs 1.86 pounds (845 grams) and is just over 4 inches (103 millimeters) long. Its maximum diameter is less than that of the GF 110mm at 3.54 inches (89.8 millimeters), however its filter thread is a wider 82mm size. Looking at the optical construction of the ultra-wide prime, it has 15 elements in 12 groups, including a pair of aspherical elements and 4 extra-low dispersion elements, 1 of which is a Super ED lens. Further, the GF 23mm f/4 includes Nano GI coating to suppress ghosting and flare.

In addition to the finalized specs and information on the pair of GF primes, Fujifilm has also announced more GFX-centric news. Firstly, later this spring, the company will release a major firmware update for the GFX 50S. Planned additions and improvements have not yet been fully detailed, but users can expect tethering via Wi-Fi and improved exposure compensation and autofocus performance in difficult lighting conditions.

With the upcoming release of the GF 110mm f/2 and GF 23mm f/4 lenses, Fujifilm will have launched five of the six lenses they detailed in the lead up to the GFX 50S’s launch. The original six-lens roadmap has thus been updated with the addition of a telephoto prime lens and tele converter. There is no additional information available on the new telephoto prime and teleconverter, but stay tuned to Imaging Resource for more information as it becomes available. Fuji's latest GF lens roadmap sees the addition of a telephoto prime lens and a teleconverter. Also, note that the GF 45mm f/2.8 lens is on track for release this year.

For more coverage on the Fujifilm GFX 50S, click here