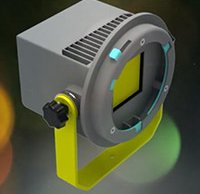 Photonicz inventor - and commercial photographer - Alex Munoz argues that the Photonicz One is the last light you'll ever need. Munoz states, "While camera manufacturers continue to innovate, today's photography strobes are unable to keep up with those advancements…[Photonicz] set out to create a new approach to strobe technology that would be a reliable, powerful, universal and easy to use lighting system for the 21st century."

Photonicz One, is the world's first weather sealed LED strobe to hit the market, per Photonicz. It promises to have a lot of tricks up its sleeve, including portability ("the smallest full-featured strobe on the market"), power (thousands of full power - 2,500Ws equivalent - flashes per charge), an app-based touch screen interface, a remote, wireless syncing at up to around 3,000 feet, Bowens S-type compatibility, universal batteries and more.

Let's take a look at speed in particular. The LED strobe has essentially zero recycle time and offers high speed sync at up to 1/50,000 of a second across the entire power range of the strobe. Photonicz states that it can sync with your camera's shutter at up to 1/32,000s, allowing high speed sync with any camera system.

There are many more features and specifications available on the Kickstarter page. The all or nothing Kickstarter campaign is still quite far from its goal of $84,900 with 38 days left on its campaign. Go check it out and if it seems like the right lighting solution for you, you can back the project and get a Photonicz One and power supply for $749 with delivery expected in February.