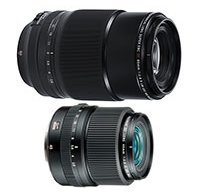 Fujifilm has announced numerous new lenses and plans for their X Series and the GFX Series. There's a lot to cover, so let's start with the X Series first. And if you haven't yet read about the Fujifilm X-E3 camera, head over to our Fujifilm X-E3 preview.

Alongside the X-E3, Fujifilm has also announced a new X Series lens, the XF 80mm f/2.8 R LM OIS WR Macro. As is evidenced by its name, the lens has Optical Image Stabilization and is weather resistant. The lens is weather sealed at eleven points around the barrel for weather and dust resistance. It can also operate in temperatures as low 14° F (-10° C), so this appears to be a tough lens. Further, the lens' front element has fluorine coating for improved durability. Looking at the lens' design, it includes 16 elements across 12 groups, including one aspherical ED lens, one Super ED lens and three ED lenses. The OIS system is rated to provide 5 stops of shake correction. The XF 80mm Macro includes enhanced autofocus capabilities via its Floating Focus System, which suppresses aberration. The linear motor provides "fast and near-silent autofocus performance." Perhaps the biggest feature of the new XF 80mm f/2.8 lens, which is compatible with Fujifilm's 1.4x and 2.0x teleconverters, is that it is the very first X Series interchangeable lens to have a 1.0x magnification factor. Fujifilm X Series Lens Roadmap: Get ready for an ultra-wide zoom and a long telephoto prime

The XF 200mm f/2 fits a distinct role as well, more than doubling the longest prime lens in the Fujinon XF lens lineup (the XF 90mm f/2 is currently the longest prime lens). The XF 200mm f/2 will also be faster than the XF 50-140mm and 100-400mm zoom lenses, which are f/2.8 and f/4.5-5.6 respectively. The 300mm equivalent XF 200mm f/2 R LM OIS WR looks to be a very intriguing option for sports and wildlife shooters in particular, but portrait photographers may want the shallow depth of field as well.

It's not just X-Series shooters having all the fun today, GFX 50S owners have new lenses to get excited about as well. The Fujifilm GF 45mm f/2.8 R WR lens, which we knew was coming, has been announced to release this November for $1,700. We have new details about the fast prime lens now though, including that the 36mm equivalent lens will weigh only 17.3 ounces (490 grams), making it the second lightest lens in the GF lineup, behind only the GF 63mm f/2.8 (which also beats the GF 45mm as the most affordable lens for the GFX by $200). The GF 45mm f/2.8 R WR is the sixth lens in the still-fresh GFX system. Considering that the GFX 50S itself only launched in late February alongside three lenses, for Fujifilm to hit half a dozen optics in the medium format system by the end of its first calendar year is impressive. The 45mm f/2.8 has 11 elements across 8 groups, including one aspherical lens and a pair of ED lenses. It also includes Nano GI coating to help suppress ghosting and flare and is weather and dust resistant.

Now that we know what is coming this November, what about further down the road? Fujifilm has updated its GF lens roadmap with the GF 250mm f/4 R LM OIS WR telephoto prime and the GF 1.4x TC WR. The GF 250mm f/4 offers a 35mm equivalent focal length of 197mm and a 277mm equivalent with the upcoming 1.4x teleconverter attached. The GF 250mm will be the longest lens in the GF lens lineup by over a factor of two and Fujifilm says it's aimed at portrait and landscape photographers in particular.

Well, that sure is a lot of Fujifilm news! The company also announced a wide array of firmware updates, which will be featured in this week's Firmware Friday, so stay tuned to Imaging Resource for the full scoop. To learn more about the new products, click the links below!