Caffeine Priority: Wrapping up the “monkey selfie” case and a wildlife photographer gives back 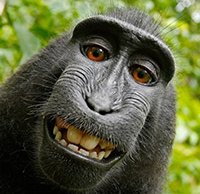 Wake up with IR! Here's today's cup of Caffeine Priority...

The saga of the "monkey selfie" came to an end earlier this month. For those who are unfamiliar with the story, the gist of it is that an Indonesian macaque, Naruto, used photographer David Slater's camera to take a selfie. That selfie, which is the index image for this article, has been used by many media outlets since its capture in 2011, with Slater arguing that he owns the image the monkey captured and others arguing that the monkey owns the photo. After a years-long legal battle, which was heard by multiple courts, a settlement between PETA (who filed a lawsuit on Naruto's behalf) and Slater has been reached.

The settlement includes terms that Slater will donate 25 percent of any future revenue derived from Naruto's selfie to charities which protect the habitats of crested macaques in Indonesia. A joint statement released by PETA and Slater reads, " PETA and David Slater agree that this case raises important, cutting-edge issues about expanding legal rights for nonhuman animals, a goal that they both support, and they will continue their respective work to achieve this goal.” While it is unclear how much money Slater has already made from the selfie, and he has argued in the past it should have been more, it is good news that macaques and other animals which share the habitat in Indonesia will stand to benefit from the iconic image moving forward.

The outcome of the long legal fight has had a positive ripple effect. Professional wildlife photographer Andrew Parkinson, who has worked for the BBC among others, has pledged to donate a percentage of his profits toward protecting wildlife and their habitats.

Parkinson says, "We need to start giving back more to our subjects." Parkinson continues to discuss that there is a hypocrisy when people admire and profit from the beauty of wildlife but then continue to take actions which exploit habitats or devalue the lives of non-wild animals. While I hesitate to editorialize too much on this topic, it is certainly worth considering how frequently we benefit from wildlife and beautiful natural areas as photographers and how we can take further actions to help protect the animals and environments so many of us regularly enjoy. There is a lot of value in all life and there are many strong arguments to be made about what moral obligations we may have and I hope that Parkinson's move inspires others to follow suit. The world is a beautiful place and worthy of our efforts to preserve the natural environment.

Although the monkey business of the Naruto selfie might have gone on far too long for some people's tastes, and used up considerable legal resources, ultimately it had a positive outcome for Indonesian wildlife and thanks to people like Parkinson, other animals and environments as well. Some readers will likely share in my disappointment that ultimately there continues to be an unfortunate lack of legal protection given to non-human animals and others will continue to find the entire situation to be truly absurd, something that I believe generally unifies us all is that nature is beautiful, valuable and deserving of continued and further protection.

Caffeine Priority is a series of short photo-tidbits to ease you into your day and give us a chance to share a bit more of what life’s like here at IR. We're more like a group of friends testing and talking about cameras and lenses than the buttoned-down, big-corporation world that some of our photo-friends at other companies work in; hopefully, these little snippets will share some of that. So... grab another coffee and join in the conversation with us down below!