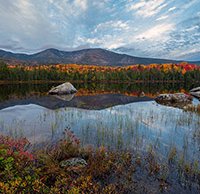 Aurora HDR 2018 is not only much faster than Aurora HDR 2017, it also offers a better user interface, new masking and an improved tone mapping algorithm. The software makes it very easy to make a natural-looking HDR image. I am not a big fan of the extreme high dynamic range images which were once all the rage. However, the HDR process applied in moderation allows me to present a scene with similar dynamic range as to how my eyes saw it, which is simply not possible in every situation using a single image and physical filters. In a few short minutes, I was able to make an HDR image using five RAW files from the Fujifilm GFX 50S and Fujifilm GF 23mm f/4 lens in Aurora HDR 2018. The software easily handled the four very large image files, although it did take around a minute to process the beginning HDR file using my MacBook Pro (late 2016 model). Of course, smaller files would be processed much quicker, but nonetheless, the software feels noticeable snappier than the previous version. I'll perform further testing for the full review.

On the topic of the GF 23mm f/4 lens, I captured the image below and then processed the RAW file. As I already knew thanks to the test images I captured with the lens upon its arrival, it is optically very impressive across the entire frame. While a full breakdown of the GF 23mm f/4's performance will come when we publish lab test results and my Field Test, I wanted to showcase the field of view on the medium format GFX 50S.

For much more on Aurora HDR 2018 and the Fujifilm GF 23mm f/4 lens, stay tuned to Imaging Resource.