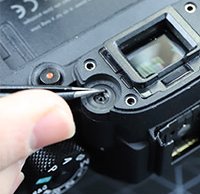 To kick off 2018, we performed a variety of water torture tests on some of the most popular cameras available from numerous manufacturers, including the new Sony A7R III. Our Best Overall Camera of the Year ended up being decided in part due to the results of that very test. The Nikon D850 performed admirably while the A7R III, an otherwise excellent camera, came up short due to water ingress in the battery compartment. The somewhat surprising results are explained by a new teardown of the Sony A7R III performed by the team at Lensrentals.

It's well-known that various A7-series cameras have struggled with weather sealing. Sony has often opted for very tightly-fitted parts (often referred to as "tight tolerances") rather than dedicated gaskets and specialized sealing in their cameras. The A7R III thankfully alters this trend. Despite looking very similar to its predecessor from the outside, the A7R III includes many changes to the construction compared to the predecessor and adds numerous points of actual weather sealing, which should make the camera more robust and durable, even when faced with challenging shooting conditions. In fact, Roger Cicala and company say that in many ways, the Sony A7R III is as well-sealed as any camera they've taken apart. Almost. The bottom panel of the Sony A7R III features no weather sealing. If water gets in, it will have fast access to critical components. Head over to Lensrentals to learn how they recommend using the camera in inclement weather. Image copyright: Lensrentals.

However, despite the sealing improvements around important components, such as the side compartments and the buttons and dials on the camera, the A7R III's bottom panel has no protection. Even if water doesn't ingress into the top, sides or back of the camera, if it trickles down the camera - which it is likely to do in a storm - then it can enter the camera via the bottom, as we noticed during our weather testing.

To see Lensrentals' full results and learn much more about how the camera design differs from the A7R II, click here. Ultimately, a camera is only as protected as its least-protected area, and in the case of the A7R III, it is apparently not well protected on the bottom.