From the kitchen to the great outdoors: Adorama releases a pair of new “Through the Lens” episodes 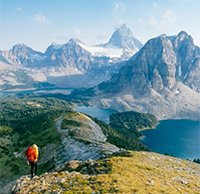 As the Canada-centric fifth season of Adorama's "Through the Lens" continues, Adorama and Sal D'Alia have released a pair of new episodes this week.

The fifth episode features food photographer Maria Koutsogiannis, who not only captures excellent images of food, but makes the recipes and prepares the food herself. Maria shoots with a Nikon DSLR she received from her father and she uses photography primarily for her own benefit. She enjoys the process of shooting and editing images, but at the end of the day, she does it for herself.

In the sixth episode of this season, we head from the kitchen to the great outdoors with photographer Stevin Tuchiwsky. Stevin is an outdoor lifestyle photographer, but his primary job is as a civil engineer.

Stay tuned to Imaging Resource for more episodes of "Through the Lens" as Adorama continues the second half of the latest season.