Previous Story Want a flash to do the bounce-thinking for you? Meet the new auto-intelligent Canon 470EX-AI speed light
Next Story Finding order in a chaotic landscape by capturing the colorful and complex textures of nature 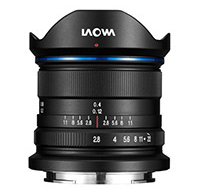 Venus Optics has announced a pair of new Laowa lenses. The first is a 9mm f/2.8 wide-angle prime lens for Canon EF-M, Fujifilm X and Sony E mounts. The second lens is a full-frame macro lens, the 25mm f/2.8 2.5-5x Ultra Macro. Let's look at them in turn.

The Laowa 9mm f/2.8 Zero-D lens has been rumored for a while and is finally coming to fruition. While pricing has not yet been disclosed, the lens is said to be arriving this April. The optic is designed for landscape, architectural, interior and night sky photographs in particular and employs a trio of special low dispersion (ED) lenses and a pair of aspherical lenses. In total, the lens has 15 elements in 10 groups. The distortion has been reduced to "zero" but if it's like the 15mm f/2 Zero-D lens we've tested, there might still be a very small amount of distortion.

On the plus side, if it's like other Laowa lenses we've used, it'll also have excellent build quality. The lens is stated to be constructed using a metal enclosure and offer "excellent robustness and luxury." The lens weighs around 7.5 ounces (215 grams), although the weight varies slightly depending on the lens mount. The lens has a close focus distance of 4.7 inches (12 centimeters). If you want very close focus, then the simultaneously-announced Laowa 25mm f/2.8 2.5-5x Ultra Macro is the lens for you. The full-frame manual focus macro lens has shooting magnification up to 5x, which is very impressive. The working distance is a mere 1.6 inches (40 millimeters) at 5x magnification. To help maintain high image quality, even at very close focus distances, the macro optic utilizes an ultra low dispersion (UD) lens and each lens is coated with multilayer coating. In total, there are eight elements in six groups. Like the 9mm f/2.8 Zero-D, the new 25mm macro is constructed using a metal enclosure and is designed to be robust. The lens is also surprisingly compact and lightweight, weighing in at 14 ounces (400 grams). The 25mm f/2.8 2.5-5x Ultra Macro lens will arrive in April with a retail price of US$399. The lens will be available for Canon EF, Nikon F, Pentax K and Sony FE mounts. You can see a review of the lens from a photographer, Photo by Richard, who had an early hands-on below.

(Via Fuji Rumors and Nikon Rumors)

Tweet
Comment
Previous Story Want a flash to do the bounce-thinking for you? Meet the new auto-intelligent Canon 470EX-AI speed light
Next Story Finding order in a chaotic landscape by capturing the colorful and complex textures of nature