Previous Story Canon G1X III Field Test Part II: Generally capable and easy to use, but imperfect and expensive
Next Story Converting a daytime shot to a nighttime shot in 3 steps using Photoshop 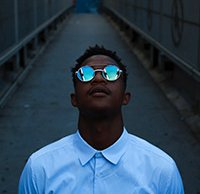 Capturing the right look for skin tones is tough. Anyone who has captured portrait images knows how tricky it can be to nail exposure and color balance. However, when photographing subjects with darker skin tones, it's often even more challenging. Photographer and Adobe Creative Resident Aundre Larrow has 10 tips to share about photographing dark skin tones over at Adobe Create Magazine.

The technical challenges of photographing dark skin tones go back to the film era, when film chemistry and processing was often biased toward lighter skin tones. Particularly when photographing light and dark-skinned people in the same image, proper exposures were nearly impossible. With the advent of digital camera technology, the issue is less prevalent, but Larrow remarks, "we aren't totally out of the woods yet." This is especially true for photographers who enjoy film presets, which can occasionally be problematic.

Photo by @aundre || I had the opportunity to share some of my recent portrait work about visibility and representation in photography while asking: how can I shoot and edit darker skin tones more easily? Here are some portraits from that project, and check out Lightroom’s Instagram Stories for my top tips.

A post shared by Adobe Photoshop Lightroom (@lightroom) on

What is the best way to photograph darker skin tones? If you're photographing a group of mixed skin tones, it's best to place your light source -- if you're using one -- closest to the darkest-skinned subjects. When shooting in bright conditions, it's a great idea to use reflected light anyways, but it's especially true when photographing those with darker skin tones, which can create a lot of contrast in a bright scene. To see the rest of Larrow's tips, click here. For more of his work, be sure to visit his website and follow him on Instagram.