Should you underexpose your images on purpose to save highlight data? 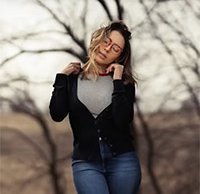 You'll often photographers discuss the benefits of exposing to the right. This is exposing your RAW images such that you push the histogram as far to the right without losing highlight detail as possible. The benefits of this method include getting better image quality and less visible noise. However, what about underexposing your images on purpose and then bringing up the detail during post-processing? This is the topic photographer Manny Ortiz explores in his newest video.

As he says at the beginning, ultimately, what matters most is that you're happy with your final results. If you do it differently than others, that doesn't mean you're doing it wrong, especially if you like your images. But perhaps there is a better way to do things. Let's find out.

Ortiz tends to underexpose his portraits, why is this? He wants to ensure that he doesn't blow out any of his highlights. While it's true that you can often overexpose images in your camera -- which will display to you JPEG images on the screen and a histogram based on the JPEG file -- and recover the highlights in the RAW file on your computer later, Ortiz doesn't want to risk losing highlight detail. If you're shooting at a low ISO, you won't have much noise to contend with even if you have to increase the exposure of your image a half stop or more during post-processing. Of course, the image quality won't be as good as it would be had the image been perfectly-exposed at the time of capture, but you'll have to pixel peel to see much variation.

To ensure he gets the best possible image quality, Ortiz doesn't underexpose every frame he captures. He just wants to make sure that he will have files without blown highlights, supposing that his brighter images have unrecoverable highlight detail. You need to understand your own camera, however, and understand how much highlight detail you can recover in standard shooting situations and learn what limits your own camera's sensor possesses.

What is your method for ensuring you capture highlight detail? Do you underexpose on purpose sometimes or do you always use a method like expose to the right?