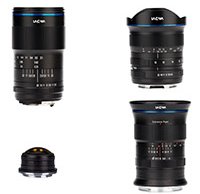 Venus Optics has announced four new Laowa lenses in development. The lenses will be available for a variety of camera systems, including a Micro Four Thirds fisheye lens, an FE zoom lens, a Macro lens for multiple mounts and a GFX ultra-wide prime. All four lenses detailed below will make their full debut May 3-6 at the Beijing P&E Imaging fair.

Kicking things off with the new fisheye lens, the Laowa 4mm f/2.8 Fisheye MFT. This 8mm equivalent fisheye lens offers a 210-degree field of view and weighs in at a very lightweight 135 grams (0.3 pounds). The lens has seven elements across six groups and has a maximum magnification of 0.11x. Next is the Laowa 10-18mm f/4.5-5.6 FE zoom. This is currently the widest zoom lens available for full-frame Sony E-mount cameras and has been designed with travel photography in mind. The lens features 14 elements in 10 groups and weighs just over a pound (496 grams). The lens has a maximum magnification of 0.25x. The lens offers a 102 to 130-degree field of view and it has a rear filter slot. You can adjust the aperture ring to be clicked or click-less via an on-barrel switch, making the lens potentially quite good for video. The new macro lens is a 100mm f/2.8 2:1 Ultra-Macro APO prime. This lens has a maximum magnification ratio of 2x, which doubles the standard macro magnification of 1x. The lens will be available for Nikon, Pentax, Canon and Sony mounts and is a full-frame lens. Interestingly, the Nikon and Pentax versions will have 7 aperture blades whereas the Canon and Sony versions will have 13. The lens features a dozen elements in 10 groups and weighs 22.5 ounces (638 grams). The lens features an apochromatic (APO) element to virtually eliminate chromatic aberrations. Finally, Laowa has announced their first dedicated GFX lens, the 17mm f/4 GFX Zero-D. This is the widest native GFX lens available and offers a field of view equivalent to a 13mm lens on full-frame cameras, which is 113 degrees. The lens offers close to zero distortion and has a large 86mm filter thread. The lens is well-suited for landscape, architecture and interior photography. It features 21 elements in 14 groups, including a pair of aspherical lenses and three extra-low dispersion elements.

All four lenses are expected to be shipped mid to late 2018 with exact release dates and prices to be determined. For more information, head to Venus Lens' website.